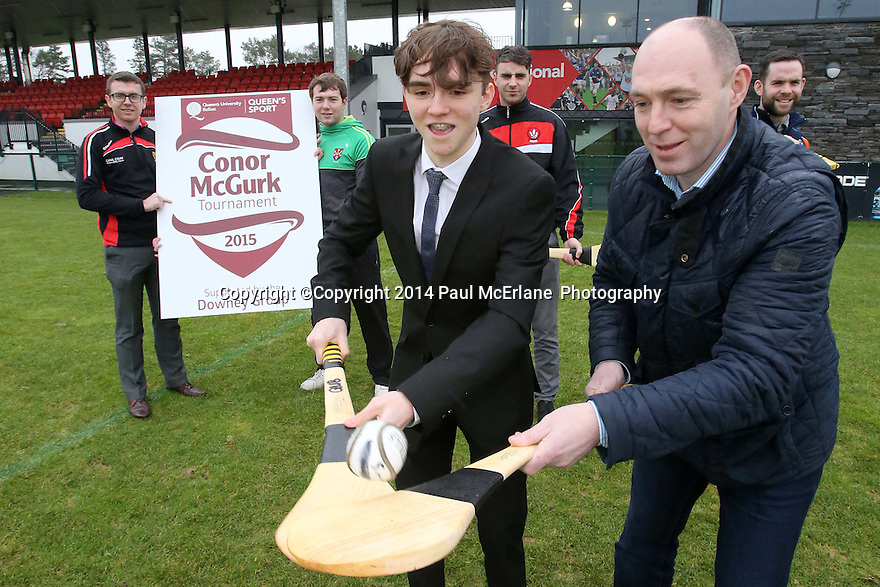 HANDOUT PHOTO/FREE TO USE: Gathering for the Photo launch / Sponsor announcement of new invitational Ulster hurling competition where
Background: Conor Woods (Down), Fegus Donnelly (Queen’s), Liam og Hinphey (Derry) and Conor Clifford (Armagh). Foreground: Conor McGurk Junior and Henry Downey (Downey Group) at the Arena Pitch, Upper Malone playing fields, Queen’s University Belfast. Queen’s University Hurling Club establish preseason hurling competition the memory of Hurling Club Past Member Conor McGurk, who died recently Photo/Paul McErlane
Queen’s University Hurling Club have established an invitational pre University Championship / County National League tournament to be played throughout the month of January at the playing fields at Upper Malone (The Dub). The competition, which is supported by Comhairle Uladh, will feature four teams who will compete in a round robin league section during the first four weekends in January. The top two teams will feature in the final on the Arena Pitch at Queen’s on Friday 23rd January.

Speaking at the launch of the new tournament, Ulster Council Vice President Michael Hasson said “The Ulster Council are pleased to support this tournament at Queen’s. Hurling in Ulster has a need for a pre league competition that can off our teams the same preparation as the McKenna Cup. We fell confident that the Conor McGurk Tournament will offer that”.

Head of Sport at Queen’s University Elizabeth McLaughlin emphasised that Third Level Institute were delighted to assist with this new initiative for Ulster Hurling "Conor McGurk has been a tremendous supporter of Hurling at Queen's for many years and we hope that the initiation of this tournament in his memory will be a fitting tribute to his great contribution to the development of the sport at the University."