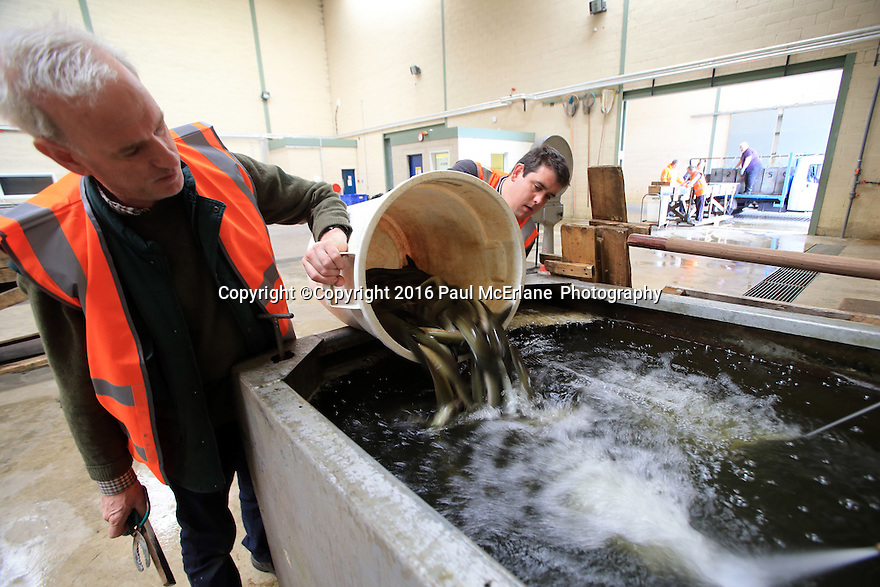 PICTURES TO GO WITH HENRY MCDONALD BREXIT STORY ON LOUGH NEAGH EELS. Brownish green in colour, slithering and sliding into plastic containers after the catch of the day, the Lough Neagh eel is the reason why most people living around the shore of the UK’s largest freshwater lake will be voting to stay inside the EU next month. Every evening from now to mid November up to four tonnes of live wild brown eel fished from the 156 square mile lough will be flown out of Northern Ireland principally to the Netherlands to be eaten the following day. The export of the Brown eel nets the Lough Neagh Fishermen’s Co-operative around £3 million per year with their key consumers being the Dutch and the Germans.
On a murky morning beside the lough inside an aircraft hanger size building at Toome, Pat Close joined his workers in using thin pieces of wood to sweep thousands of quivering eels into the buckets that will be sealed and then sent by cargo plane to Europe a few hours later. Photo/Paul McErlane
©Copyright 2016 Paul McErlane Photography